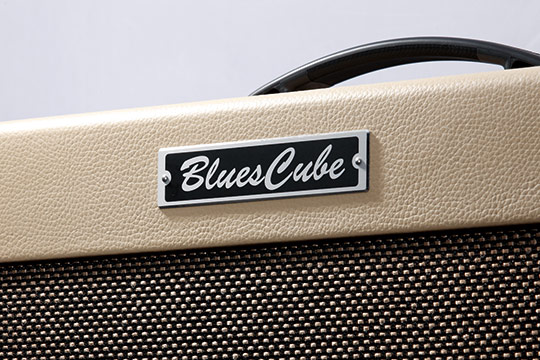 Warm, powerful, responsive, dynamic, elastic…these are all terms that guitarists use to describe the satisfying experience of playing their favorite tube amps. Thanks to Roland’s Tube Logic, these words can be applied to the Blues Cube as well.

Dramatically evolved from the first-generation sound of the original Blues Cube amps from the ’90s, today’s Tube Logic accurately provides the complex, highly interactive behavior of classic tube designs in meticulous detail, providing the magical “it” factor that takes a guitar amp from a simple sound system to a living, breathing musical instrument.

Great feel, distortion control with touch and volume, bloom, sparkle, power supply “sag,” and more—everything that players love about a finely tuned vintage tube amp is present in abundance with the Blues Cube.

The Guitar and Amp: Equal Partners in Tone

Serious electric players know that the amp they choose is a vital component in their sound, and every bit as important as the axe they play. An electric guitar doesn’t come alive until it’s plugged in—without amplification, it has no strong voice.

Additionally, the amp shapes the final sound to an enormous degree. Even if you’ve got the most coveted vintage guitar in the world, you can’t make it sing to its full potential simply by using an expensive amp. That’s why seasoned guitarists spend so much time seeking out amplifiers that fully support their personal playing touch and sensibilities. 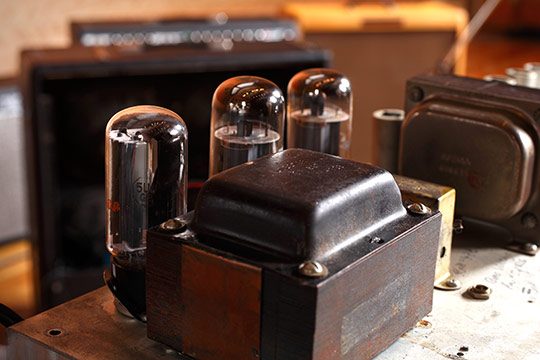 Without a doubt, classic tube designs have been the benchmark for top guitar tone since the beginning of electric guitar. The tweed-era combo amps from the 1950s have remained enduring favorites among discerning players for their rich sound, dynamic feel, and sweet, touch-sensitive distortion tones. They also greatly influenced many designers of later amps, and their circuits served as the basic blueprints for the iconic stack amps that first appeared in the 1960s.

With the innovative Tube Logic design philosophy that’s at the heart of the Blues Cube series, we’ve nailed everything that players love about the classic tweed-era tube amps. Not just the sound character, but the organic feel and response as well—in short, every nuance that makes an amp a real musical instrument, one that inspires you and makes you feel great every time you plug in to play.

With our fresh, modern approach, we’ve eliminated the downsides of tube amps as well, such as fragility and fluctuating stability. We’ve also incorporated huge benefits for the contemporary player—the ability to get “your” tone at any volume, reduced weight for easy mobility, and reliable, maintenance-free operation. 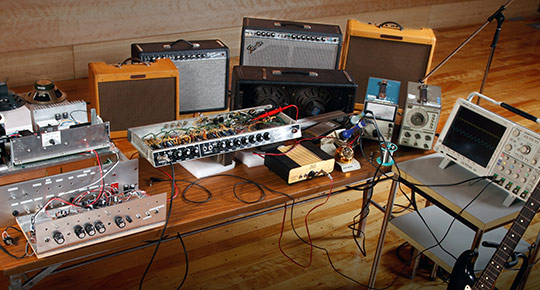 The quest to find the Blues Cube tone started with the components that make up the basic tube circuitry of the most revered tweed-era amplifier. Specifically, this is a preamp section with one 12AY7 and two 12AX7 tubes, a passive tone stack, and a “long-tail pair” phase inverter. The Class AB “push/pull” output section includes two 6L6GC power tubes and an output transformer. The power section contains a GZ34 rectifier tube, and a fixed-bias method is employed for the power tubes.

Beyond the individual components, it’s also essential to understand how they work together in every subtle way to define the amp’s character. For example, in addition to tube types, the power supply is an important factor in determining the characteristics of an amp’s sound. Power supply types such as B+ or C- are significant factors that deeply relate to the curve of power tube gain or saturation. 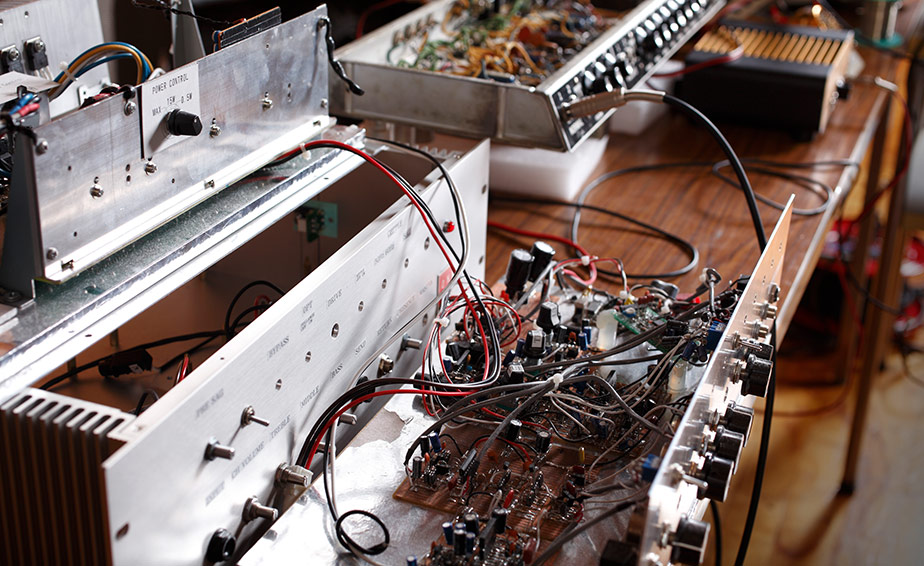 There’s a certain point in the dynamic interaction between the power supply and power tubes that produces a very good feeling for the player. The attack and sustain—the characteristic “bite” and compression of a tube amp—go together in a pleasing way in a great amp. To achieve this all-important response, we made adjustments over and over to reach the perfect balance.

The Blues Cube’s power amp section has also been fine-tuned with deep consideration for the dynamic factors introduced by a push-pull tube circuit. This has a big influence on the overtone aspects of various distortion characteristics, such as crossover distortion, symmetric and asymmetric distortion, and sag, which all affect the overall feel. 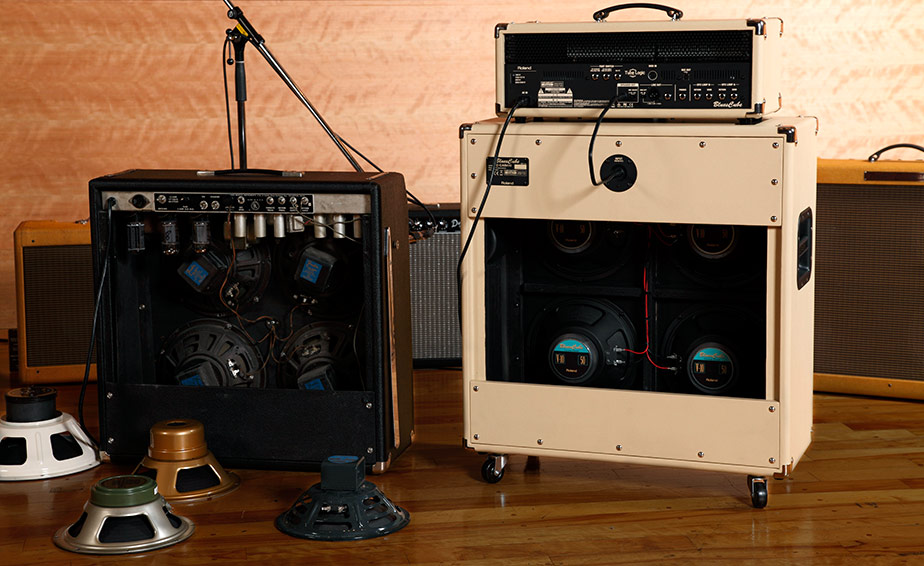 In the Blues Cube, the preamp section uses a high-impedance FET input and a differential transmission method to preserve the pure guitar signal as it travels throughout the circuit. The power amp section consists of a discrete solid-state amp, driven by a high-impedance circuit to interact with the speaker characteristics, another essential part of great guitar tone. This amp-speaker interaction is fine-tuned with DSP for very precise adjustment. 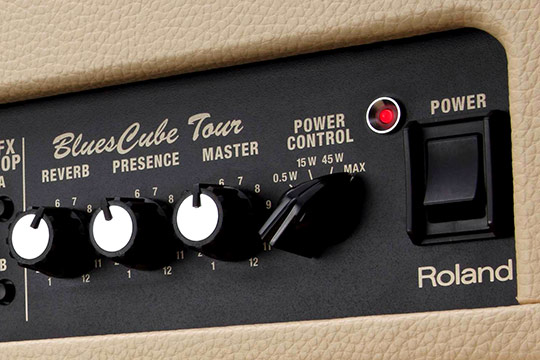 With a tube guitar amp, you really need to turn up the volume and push the output tubes to get the amp to open up and sound its best. Of course, this organic behavior is present in the Blues Cube as well. However, because guitarists have to match their volume to suit the playing situation, cranking an amp to its “sweet spot” is not always possible.

In these situations, players that use tube amps often employ power attenuators between the amp’s output and speaker cabinet. While this approach can be relatively effective, the attenuator compromises the tone, dynamics, and feel to some degree, and this increases as more attenuation is applied. This is because the load on the power amp is lightened as attenuation is increased.

The Blues Cube has a variable power control built in, which allows players to get those coveted cranked-amp tones at any volume. However, this is not a simple attenuator. With Tube Logic, the power amp works at full power even when the output wattage is lowered by the power control function. The wattage is dropped inside the power control circuit itself, making high-load behavior and low volume work smoothly together, with no tonal compromises.

A Passion for Great Guitar Sound 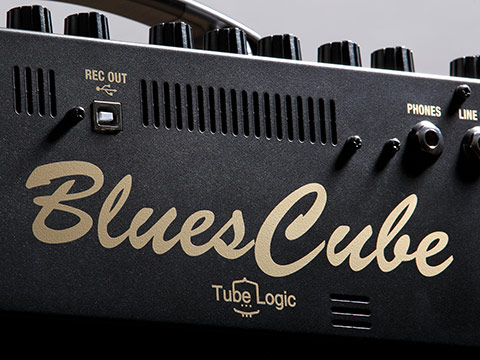 How did the Blues Cube become a real musical instrument? While the amp was developed in the engineering lab, the true answers were only revealed through exhaustive trial-and-error sessions with many fine players.

When a guitarist bonds with a great amp, they can’t stop playing—the player, amp, and guitar are responding as one, seamlessly connected. Some players express this organic interaction as having a “conversation” with their instrument. And the joyous inspiration that results brings performances to the highest level. Ultimately, that is the goal of our instrument, the Blues Cube amplifier.