By the early ’90s, preset-driven digital synths with limited hands-on controls dominated the landscape. The JD-800 changed all that in 1991, bringing the synthesizer world back to its roots with a massive control-laden panel and an aggressively electronic sound palette. With its gleaming tone and monster sound-shaping potential, the influential JD-800 helped define the sound of popular music over the next two decades. 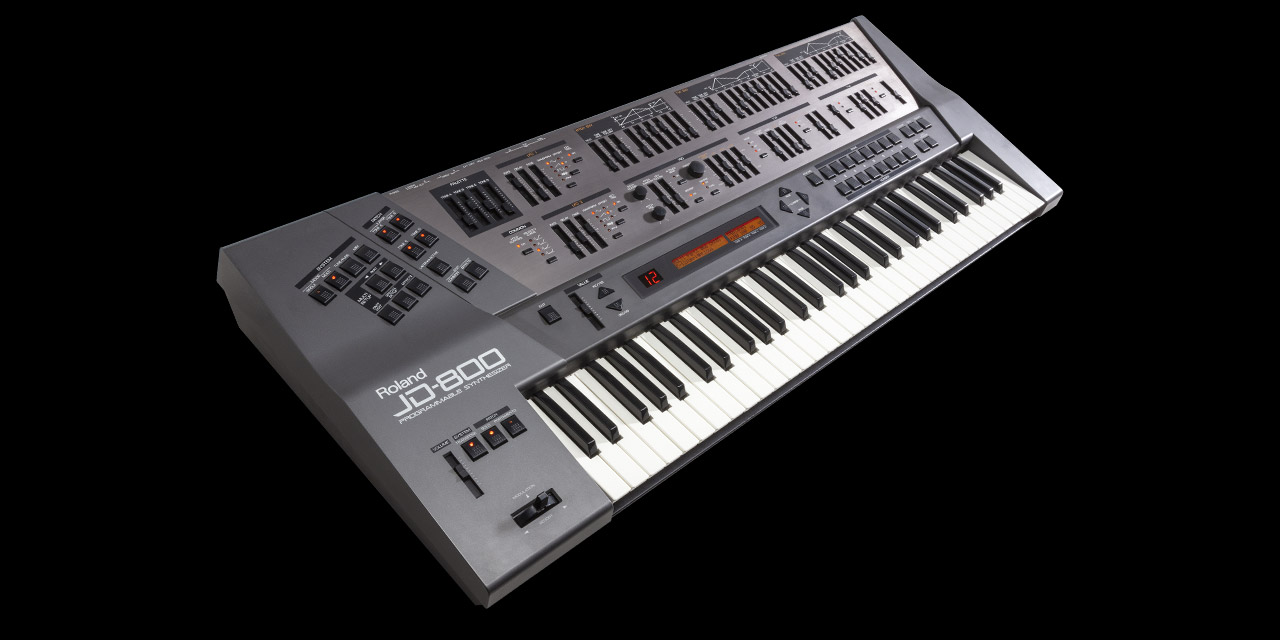 An ’80s icon on your tabletop.

Released in 1985, the JX-8P was among the last of Roland’s analog polysynths. With two digitally controlled oscillators per voice, it took analog into new territory with the ability to generate crisp, clear tones associated with the crop of all-digital synthesizers arriving on the scene. This hybrid approach made it highly versatile, especially with the hands-on editing functions of the companion PG-800 programmer. A favorite for its rich strings, pads, and brass sounds, the JX-BP’s characteristic tone is imprinted on numerous albums and movie soundtracks from the mid-’80s to today. 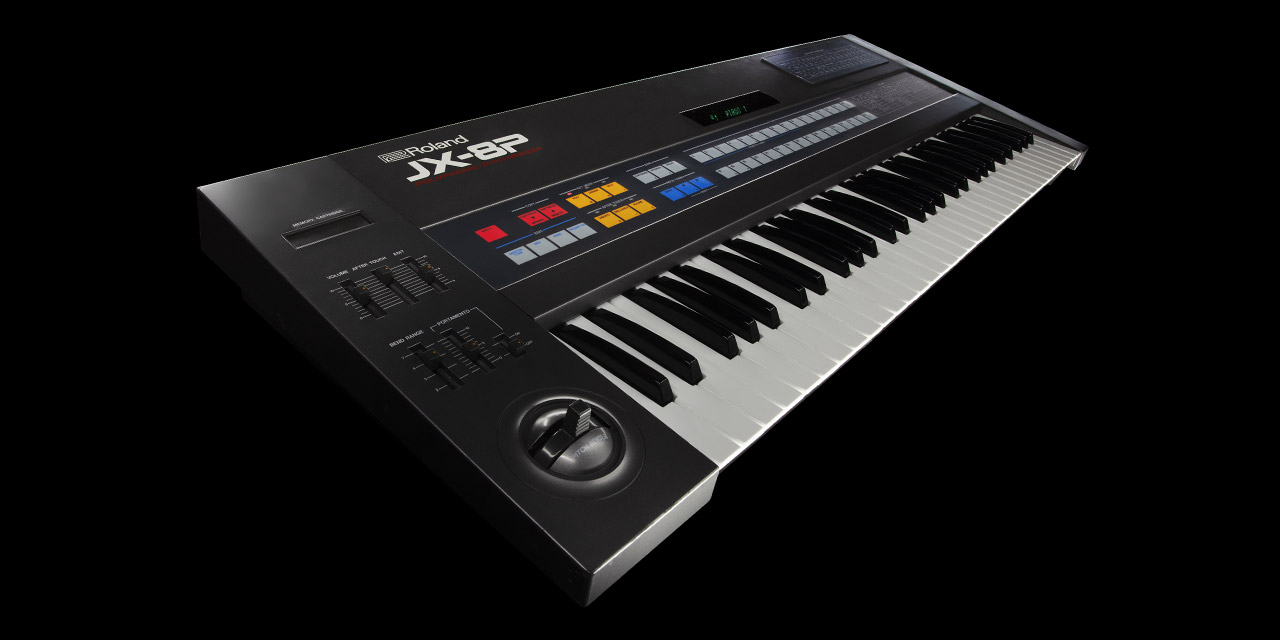 The TR-606 was a programmable drum machine released by Roland in 1981. Originally designed as a companion to the TB-303 Bass Line for rhythm accompaniment, its size, price, and ease of use lowered the bar for music production. The punchy mid-range kicks, popping toms, and sizzling hi-hats were a hit with DIY musicians and appear across an array of genres, from 80s new wave and punk to rock and electronic styles. It’s the backbone of numerous classic tracks and musicians continue to seek out the TR-606 for its alternative approach to the Roland TR sound. 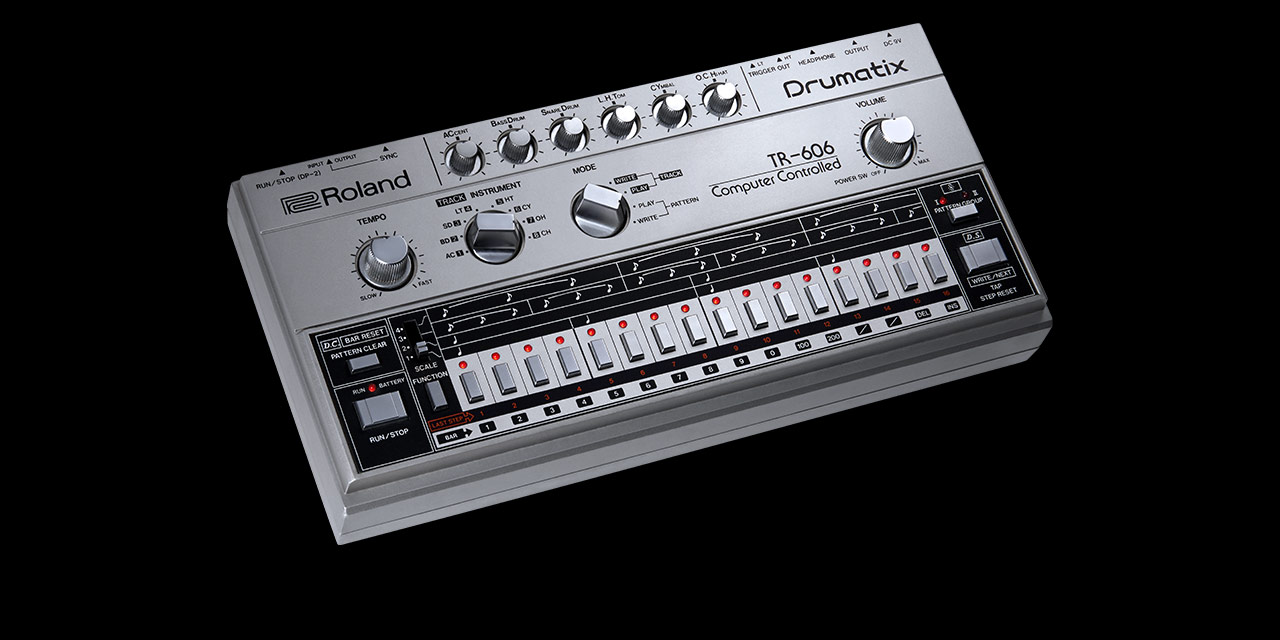 Everything You Love About Vintage JUNOs—In One Synth

The JUNO-60 was a polyphonic analog synthesizer released by Roland in 1982. Immediately following the JUNO-6, the JUNO-60 was one of the first synthesizers to carry the JUNO name. In fact, it was nearly identical to the JUNO-6 except that it added the ability to store up to 56 presets (or more onto cassette tape!). The JUNO-60 is revered to this day for its punchy yet stable sound. This can be attributed to its (at the time) state-of-the art digitally controlled oscillator (DCO) and sweet, juicy filter. It had the fat, warm sound of analog synthesis while maintaining tuning stability and a hands-on interface with buttons, sliders, and switches. And it also had that lush, ethereal ensemble chorus that the early JUNOs are known for and is such a huge part of their distinctive sound. The onboard arpeggiator made the JUNO-60 able to churn out a lot of sound all on its own. Popular in its time, and appearing on countless tracks, the JUNO-60 is more sought-after than ever and sits high on the list of legendary synthesizers. 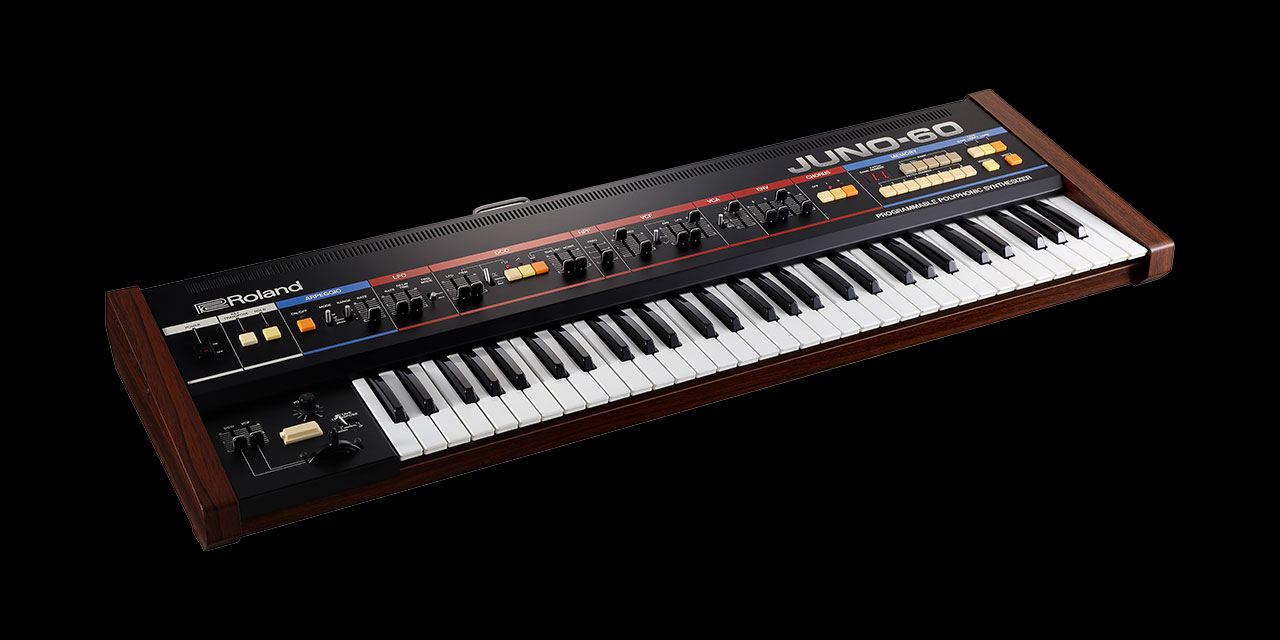 The Legendary TR-808 Sound in the Palm of Your Hand

There are few musical instruments that have affected the course of modern music like the Roland TR-808 Rhythm Composer. The term ‘808’ has an immediate sonic, electronic and aesthetic signature. Inside the all-analog monster lies a big, booming BASS of a kick drum that drives a robotic clap, a brash cowbell and sizzling cymbals for a future-symphonic rhythm track. Combined with its bold black body, scrolling lights and sixteen iconic-colored sequencer buttons, the TR-808 will always be unmistakable in its form and function. The day the TR-808 fell into the hands of visionary musicians and producers became the day that the idiosyncratic sound of the 808 found its voice. The 808 imparted a lasting impression on popular, electronic, hip-hop and R&B music. But perhaps its greatest legacy is that “808” means so many things to so many people. A simple rhythm box described by three-digits managed to transcend musical genres and reach a place of cultural significance. Its spirit and sound resonates to this day, inspiring new music and sub-genres with each generation of visionary. And so the cycle continues – much like its driving, looping patterns – forging a new path into the rhythmic future. 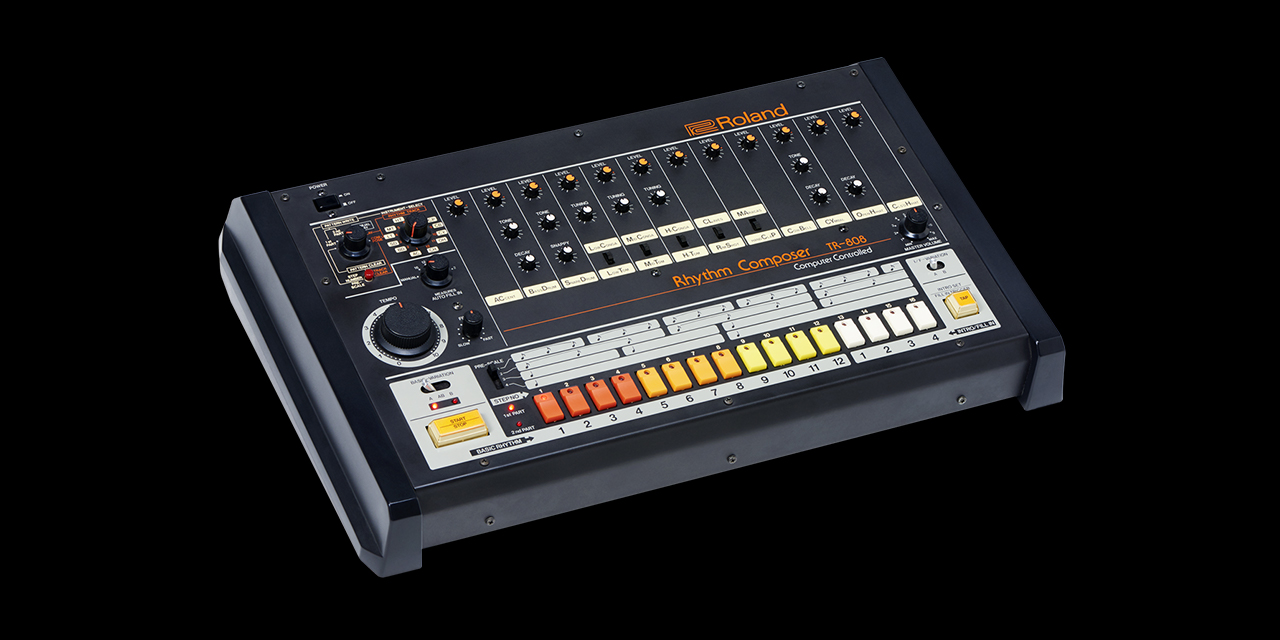 Four Times the Sounds in A Fraction of the Size

The synthesizer was the zeitgeist of music in the early 80’s. Almost every band on TV and radio featured at least one keyboard player, perched proudly behind a rack of synthesizers. This era of music saw performance and synthesis come to a convergence: the “synth star” and Roland SH-101 was born. Battery-powered, sleek lines, compact design, and wearable with a strap and grip, the SH-101 was designed to take center stage. But beneath its extroverted design lay a powerful monophonic synth voice that could transition from smooth to WILD… all at your fingertips. It wasn’t until the 90’s when this portable powerhouse was adopted by electronic music producers and featured in countless techno, house and electronica albums. The booming sub-oscillator, throbbing pulse-width modulation and simple 100-step sequencer combined for a sound that gave the “101” a cult following. Like the synth stars of decades passed, the Roland SH-101 continues to shine brightly, continues to be revered and continues to inspire. 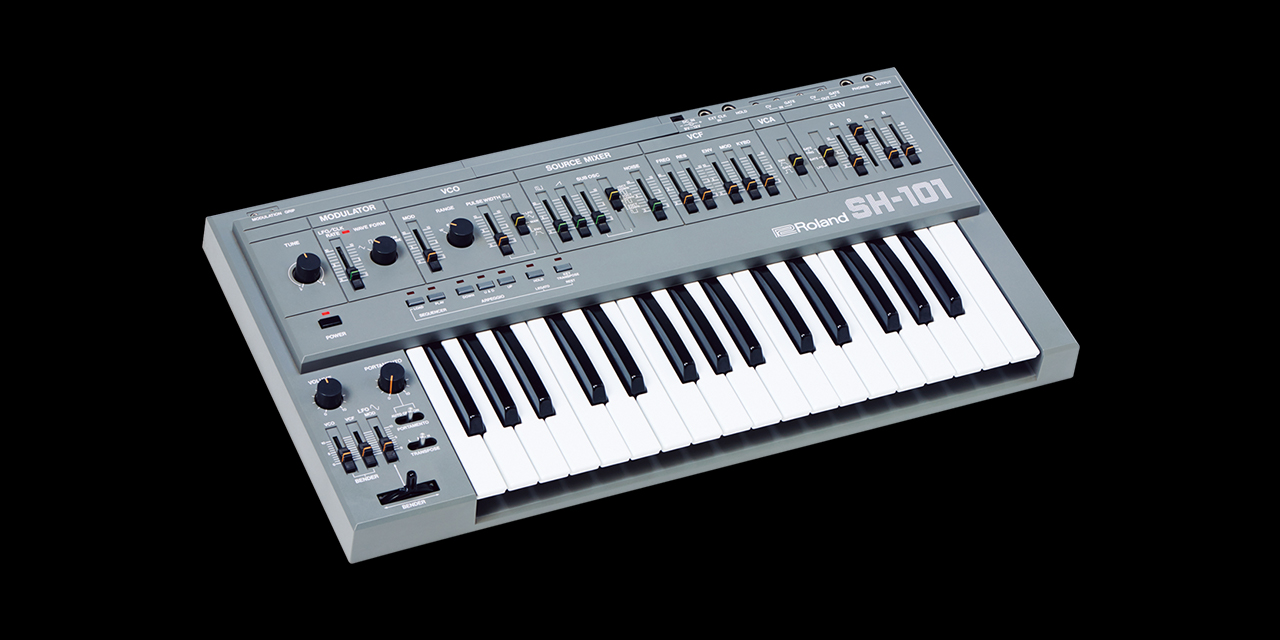 The Classic TB-303 Sound in the Palm of Your Hand

The TB-303 is a machine like no other. With an unmistakeable sonic signature brimming with warmth, energy and character, the iconic silver box defined the acid house movement of the late 1980s. Widely misunderstood at launch, the true revolution began several years later when electronic music producers rediscovered the quirky box, unleashing the hypnotic, liquid sound that captivated a generation. Powered by a single oscillator with either a square or sawtooth waveform, the true appeal of the TB-303 lay in the pattern sequencer and the filter. When combined with the cut off and resonance knobs, the 303 became a performance instrument that begged to be played, tweaked and experimented with. While we may never really understand why the 303 sound makes people want to dance, there’s no denying its power, influence and enduring ability to get a party started—it just works, even after all this time. 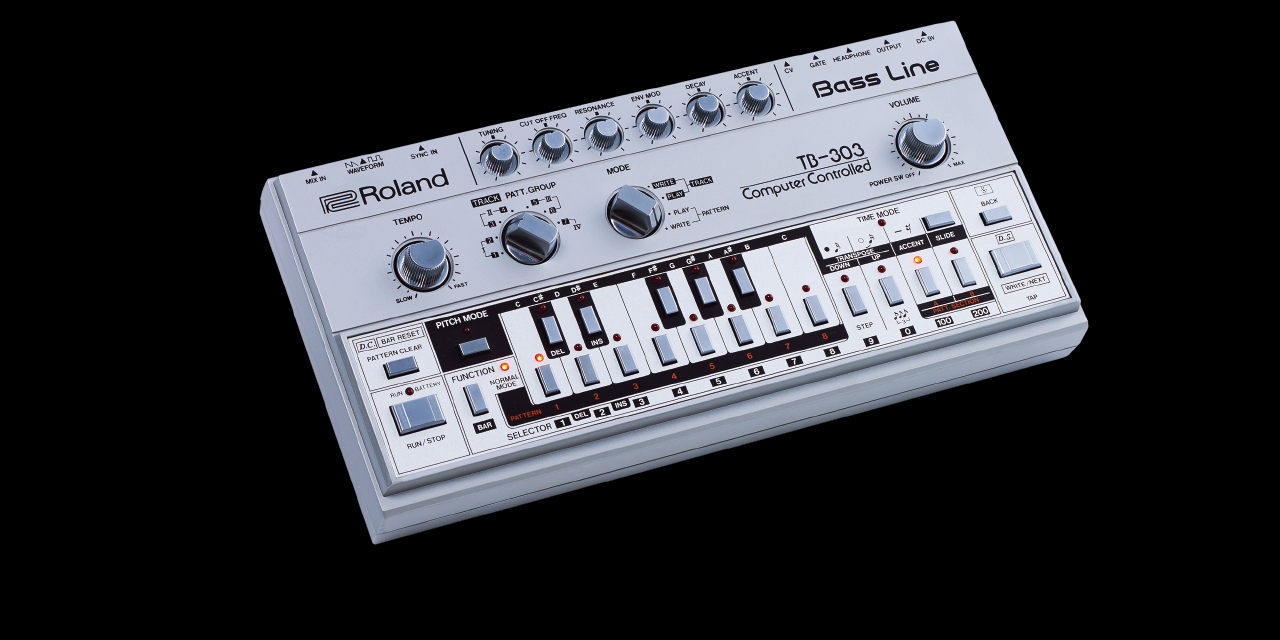 A collaborative effort from Roland and Studio Electronics, the SE-02 uses authentic discrete circuitry to create an analog synth with a distinctly American sound. The SE-02 combines ample high quality knobs, massive tone and texture, and a uniquely creative sequencer in a compact ‘boutique’ form factor.
Studio Electronics, a leader in excellence and ingenuity in analog synthesizer design since 1988.Makers of the revered MidiMini, SE-1, ATC-1, Omega 8, CODE 8, Boomstar, and Tonestar.Premium quality musical instruments hand built in the USA. 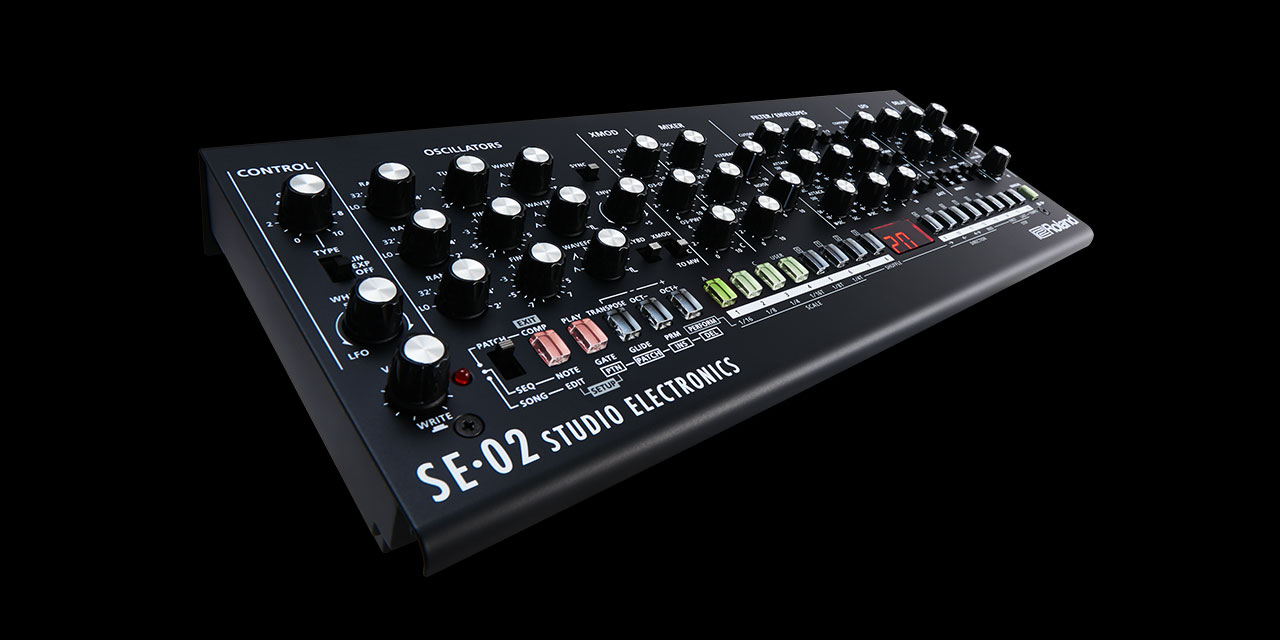 The Legendary TR-909 Sound in the Palm of Your Hand

The Iconic VP-330 Vocoder in the Palm of Your Hand

The legendary JUPITER-8 synth is back as a limited-edition module no bigger than a book.

The Roland Boutique JX-03 module continues the legacy of the JX-3P synth.

The limited-edition JU-06 is an authentic recreation of the iconic JUNO-106 synthesizer. 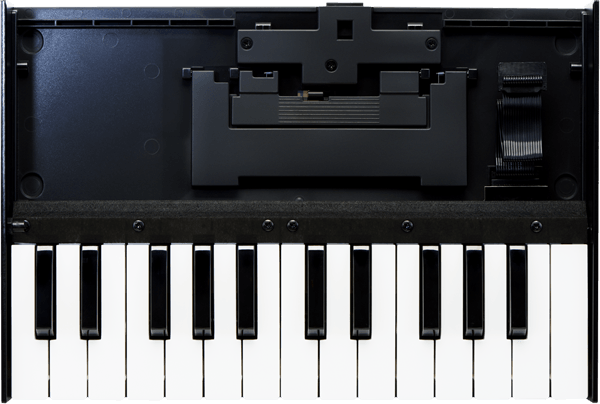 The K-25m is a 25-key, velocity sensitive keyboard designed for use with the Roland Boutique series.